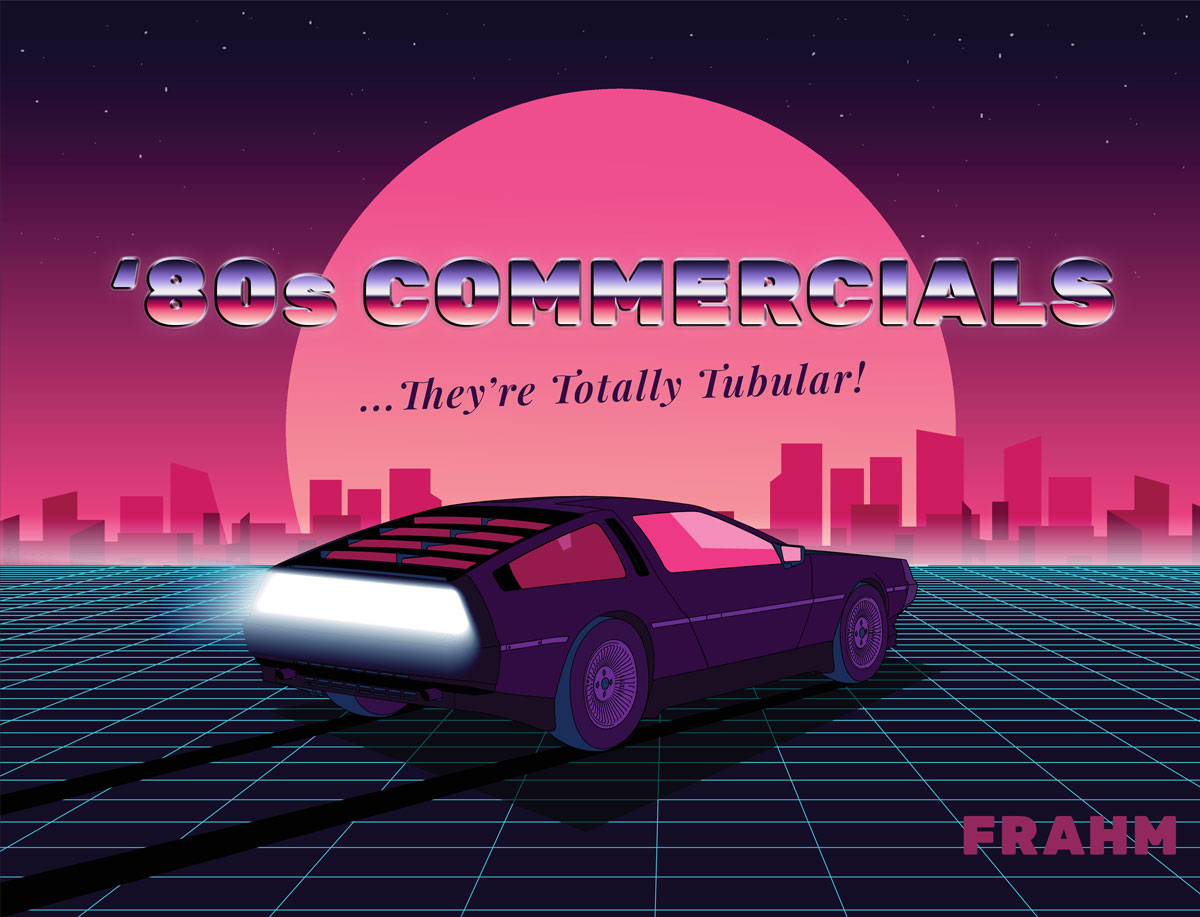 Ah, the 1980s… A decade of excessive hair spray usage and action movie workout montages. A time where mullets were trendy, leg warmers were fashionably acceptable, and Madonna made the general public blush and sweat. An era that gave us infinite sitcom parenting lessons, renewed anti-Russian sentiment, and of course, Rob Lowe. When we look back on the 80s, we can see how this decade planted the seeds for all things pop culture.

The same can be said for advertising, as the 80s ushered in a new age of commercials, slogans, slang and lingo that revolutionized the concept of modern advertising. To get a better look at how 40-year-old marketing campaigns have shaped the strategies of today, let’s pump up our Reebok’s, fire up the Delorean, and take a trip down memory lane with twenty of the most totally bitchin’ 80s slogans and advertisements:

Some will and should argue that this commercial forever changed the way major corporations approach marketing campaigns. The ‘bigger is better’ philosophy of the 1980s is on full display here, with Apple’s epic, high budget, Orwell-inspired, Super Bowl commercial introducing the Macintosh computer. Directed by Hollywood Sci-Fi legend Ridley Scott, the commercial was the highest budgeted television advertisement of its time, and with its huge sets and allegorical themes and commentary, is still one of the most talked-about advertisement campaigns today.

Everyone can pretty much agree that Coca Cola was and is always on the forefront for groundbreaking and memorable advertisements. But what makes their Max Headroom ad campaign a pristine example of definitive 80s marketing was how out of left field it was for the soda tycoon. This digital talk show host was the artificial intelligence face of Coke’s failed New Coke flavor, but while New Coke fizzled out with consumers, Max Headroom has lived long as an iconic 80s advertisement figure.

The 80s was the origin for arguably the biggest advertising battle that still takes place to this day; the Cola Wars. And what can get more 80s than 80s poster boy Michael J. Fox desperately trying to score points with his new, attractive neighbor by sprinting through the rain and dodging traffic to get her a can of Diet Pepsi? This was a commercial that helped boost Pepsi’s claim of being ‘The Choice of a New Generation”.

Wheaties branded themselves as America’s breakfast cereal in the 80s with their declaration that a bowl of their bland corn flakes was the ‘Breakfast of Champions’. This slogan has achieved outstanding longevity, thanks to their relentless bombardment of celebrated athletes lending their faces to their commercials. The acrobatic Olympic gold medal winner Mary Lou Retton was an ideal 80s spokesperson for Wheaties, and helped the cereal company establish themselves as essential nourishment for patriotism and perfection.

What kid in the 80s wouldn’t want a glass of whatever this pitcher of red juice breaking through walls and ruining parents interior decorating was drinking?? Ask any Gen-Xer if they fell victim to the chaotic charms of the Kool-Aid Man, and eight times out of ten they’d admit to knocking over their toys while screaming ‘OH YEAH’ after gulping down a glass of high-octane, tropical punch-flavored sugar water.

When we think of Nike commercials, it’s easy to envision epic displays of athleticism, shot in dramatic black and white with intense voice over narration. This Nike commercial of an 80-year-old man named Walt Stack running across the Golden Gate Bridge may not display the elite vigorousness of Michael Jordan dunking a basketball in slow motion, but it was the origin of one of the most iconic slogans ever created; ‘Just Do It’.

“Leggo my Eggo”… A phrase that rings true for any child of the 80s who competed with their siblings on who could gain possession of the portable toasted breakfast before the school bus arrived. There are plenty of incredibly catchy slogans of the 80s, but only a select few not only rhyme, but rhyme with the word ‘Eggo’.

There’s a subtle creepiness that looms over you whenever you watch a children’s commercial from the 1980s, but these clips of a talking stuffed bear named Teddy Ruxpin are borderline unsettling. While Teddy Ruxpin was a children’s toy hit in the 1980s, staring into those blank, charcoal-colored eyes today is enough to produce goosebumps and suddenly recall whether you locked the front door or not.

Speaking of creepy, can we acknowledge just what exactly the marketing team of McDonald’s was smoking when they came up with a children’s advertising campaign revolving around a burger-stealing criminal and a talking purple blob who were led by a creepy, always-smiling clown?? Whatever it was, it seemed to pay off, as this cast of misfits became the faces of the Happy Meals that helped generate billions of dollars for McDonald’s during the 1980s.

Another iconic 80s slogan, the ‘Where’s The Beef?!?’ ad campaign helped establish Wendy’s as a player in the fast food burger game, and cemented the notion that cranky senior citizens are always ideal candidates for nationally syndicated spokespersons.

There are three elements that make this 80s high class snobbery advertisement a classic: One, the casualness of one Rolls Royce passenger inquiring another Rolls Royce passenger on whether they are in custody of mustard. Two, the fact that the mustard request is not only acknowledged but is accurate. Three, this commercial was popular enough to be later included and skewered in Wayne’s World, which, in my opinion, is the highest honor one can receive.

More often than not, the best slogans are the ones that require the least amount of thought to create. That logic can certainly be applied to whoever the genius was who repeatedly stuttered the word ‘Chia’. While the novelty item Chia Pet itself may have lost steam in unit sales after the 80s, this iconic jingle forever lives on within the dark void of subconsciousness in our brains.

It’s incredible to look back on 80s advertising and think about how healthy the more popular children’s cereals were! Before Captain Crunch Berries and Cocoa Pebbles, there was Life Cereal, which became the Wheaties for children after receiving a stamp of approval from a four-year-old named Mikey. This commercial proved that if Mikey was down with a bowl of soggy bland corn flakes for breakfast, every kid could be.

14) ‘This Is Your Brain…’ – Partnership For A Drug-Free America

The 80s were the decade for public service announcements, and when it comes to analyzing the branding behind Reagan’s America, millions of 80s kids grew up associating drug addiction with breakfast. While the ‘This Is Your Brain…’ campaign was trying to go for a simple, gritty approach to warning kids on the dangers of drugs, in hindsight the commercial mainly makes viewers long for sides of bacon and toast.

This jingle still haunts the memories of any child who visited their grandparents during the 1980s. While The Clapper had a specific target audience in mind, its robotic, monotone chant jingle became stuck in the minds of millions of Americans who were perfectly fine with getting up and turning the lights off manually.

Speaking of seniors, while this famous 80s ad campaign was intended for concerned children of aging parents, it unintentionally entered the slogan hall of fame with seven words that portrayed the elderly as fragile, helpless entities capable of collapsing at a moment’s notice. But perhaps the best part of giving your parents a Life Alert was knowing that if any misfortune bestowed upon them, someone other than you would be there a half hour later to assist them with the simple, easy push of a button.

This could be the only 80s slogan that eventually morphed into more of a philosophical question than a cheesy advertising gimmick. We can only imagine how many cavities were spawned from 80s kids trying to answer this question themselves.

The game system that launched an entire industry and forever altered the attention spans of future generations of children. No 80s kid was safe from the hypnotic pull of witnessing the joys of playing Duck Hunt during Saturday morning cartoons, and soon after millions of children were introduced to Mario, society’s attitude and perception of plumbers would forever be improved.

This commercial is fun to watch in hindsight for anyone aware of the total 180 degree turn the marketing team at Slim Jim would make in the 1990s. Before Macho Man Randy Savage helped make Slim Jims the slacker snack of choice, these beef tubes were marketed as a healthy alternative to chips, accompanied with an exaggerated jingle that would make a Saturday Night Live writer jealous.

Only in the 80s could a restaurant chain featuring a talking rat mascot, his animatronic backing band, and the slimiest pizza in the world become the essential hub for every child’s birthday party. While current events may spell the end of Chuck E. Cheese’s run, at least we have precious artifacts such as this commercial to remind ourselves how far children’s entertainment has come.

See all the best advertising from each decade:

Totally Fly Commercials from the 1990s

Get in touch with Frahm Digital today. We provide premier copywriting, web design and SEO services throughout the country. Let us help you develop a better web presence – get in touch with our team to learn more.