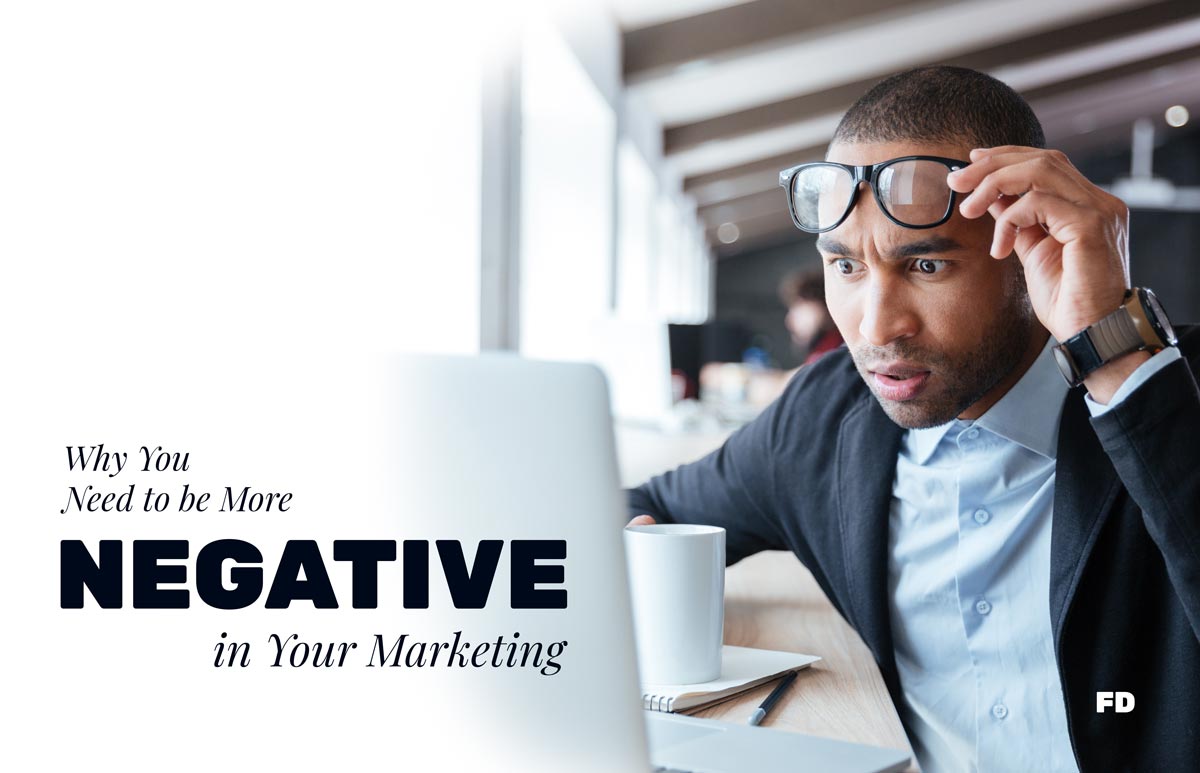 From a marketing perspective, we usually don’t associate the word ‘negative’ as a means of strategy. When you hear the term ‘negative marketing’, perhaps you conjure up memories of desperate political attack ads, Coors Light maliciously calling out Budweiser for exuberant calories, or Subway health-shaming you into caving into their ‘nourishing’ sandwiches over Ronald McDonald’s ‘greasy’, ‘grotesque’ burgers.

While those advertisement dynamics certainly pertain to certain elements of negative marketing, there’s more to this marketing approach than slandering competitors or guilt-tripping customers.

Negative marketing is essentially a tactic that attempts to tap into the psyche of the cynical consumer; someone who is relatively aware and skeptical of the intentions of marketing (and therefore can feel ‘enlightened’ and ‘pessimistic’ toward advertising in general), but is still a consumer nonetheless. Catering toward cynical consumers began to really trend in the past few decades, seemingly coinciding with a series of turbulent events such as 9/11, the Great Recession, and the Occupy Wall Street movement. Studies continue to show that consumers are more self-aware and skeptical toward advertising strategies than ever before, specifically millennials, who wield annual purchasing figures between $125 billion and $890 billion.

The bottom line when it comes to negative marketing strategies is to channel the cynicism of consumers and essentially work that angle in your favor. It’s a process of being transparent with your target audience; pulling the curtain back a bit and cutting right to the point. It’s a tactic that can be utilized in a variety of ways to either steer skepticism toward the competition, employ sarcasm to establish cognizance, or trigger strong emotions to promote relatability. Here are a few ways you can take advantage of negative marketing tactics to promote and enhance your brand:

Let’s start with grabbing one’s attention first. Headlines and titles are the first impression you can make upon your consumer audience. A negative marketing approach toward headlines would attempt to initiate a cynical connection between you and your audience; something dubious that will compel them to click. If you have a blog article that’s titled ‘9 Amazing Apps For Financial Budgeting’, you can swap it out for more cynically intriguing headlines such as ‘9 Budgeting Apps That Won’t Waste Your Time’ or ‘9 Financial Apps That Can Actually Make You Money’. This is a way to get creative with headlines and titles while harnessing consumers’ general pessimism.

In marketing, sometimes alienation can produce camaraderie. Let’s break that down: if an advertisement or content acknowledges that certain types of people can be ‘detested’ (slow drivers, slimy lawyers, out-of-touch politicians, etc.), that audience who agrees with that assessment will feel something of an affinity for that advertisement or content. For example, an energy drink company may put components of ‘normalcy’ in its marketing crosshairs, such as suited businessmen or suburban mundanity, to appeal to its target audience of teenagers, skateboarders, or other ‘alternative’ demographics. In essence, this concept of negative marketing is aligning yourself with a specific crowd by scrutinizing the antithesis of that crowd.

Stuck in traffic, obnoxious neighbors, demanding bosses; all of these are examples of common ‘negative’ scenarios all of us can relate to. When we market a product or content through a lens of ‘don’t you just hate it when…’, it can install a connection of empathetic association with a consumer. This is a great strategy to apply toward introductory paragraphs of blog entries or product descriptions, as people will read it and immediately develop an engaging rapport with such descriptions before even learning what the root of your content even is.

When our worst fears of our own selves are acknowledged or realized, that internal epiphany can produce action. Such attempts at enlightenment can be applied toward marketing, in hopes of convincing consumers that if they don’t utilize your services or buy your product, they are doomed to be the worst version of themselves. An example of this may be displaying a lethargic-looking person overindulging in snacks while watching television on the couch with the accompanying caption ‘Tired of spending another night like this?’ It’s attempting to provide a mirror to a consumer and reveal an exaggerated version of how they may self-consciously see themselves, and compel them to take action to avoid succumbing to that fear by heeding to your message and marketing.

For many people, humor and sarcasm are defense mechanisms that can either help them establish a superiority toward someone or something, or allow them to detach from commitments or responsibilities. If marketing is able to successfully tap into this perspective, that type of self-awareness can in turn disarm a sardonic, weary customer, and in turn make them associate their own personality and characteristics with the tone of your content. Whether it’s amplifying absurdity as Old Spice marketing campaigns have recently perfected or contextualizing cynicism toward the concept of marketing by acknowledging that you are, indeed, trying to sell them something, utilizing transparency by giving consumers an all knowing ‘wink’ is able to deflate a consumer’s skepticism and in turn, establish trust.

Are you trying to improve your website's messaging?

If you're interested in learning what it's like to work with us, click the button below to receive a no-hassle, 100% free website audit. We'll give you actionable insights on ways to improve your communication, design and SEO.