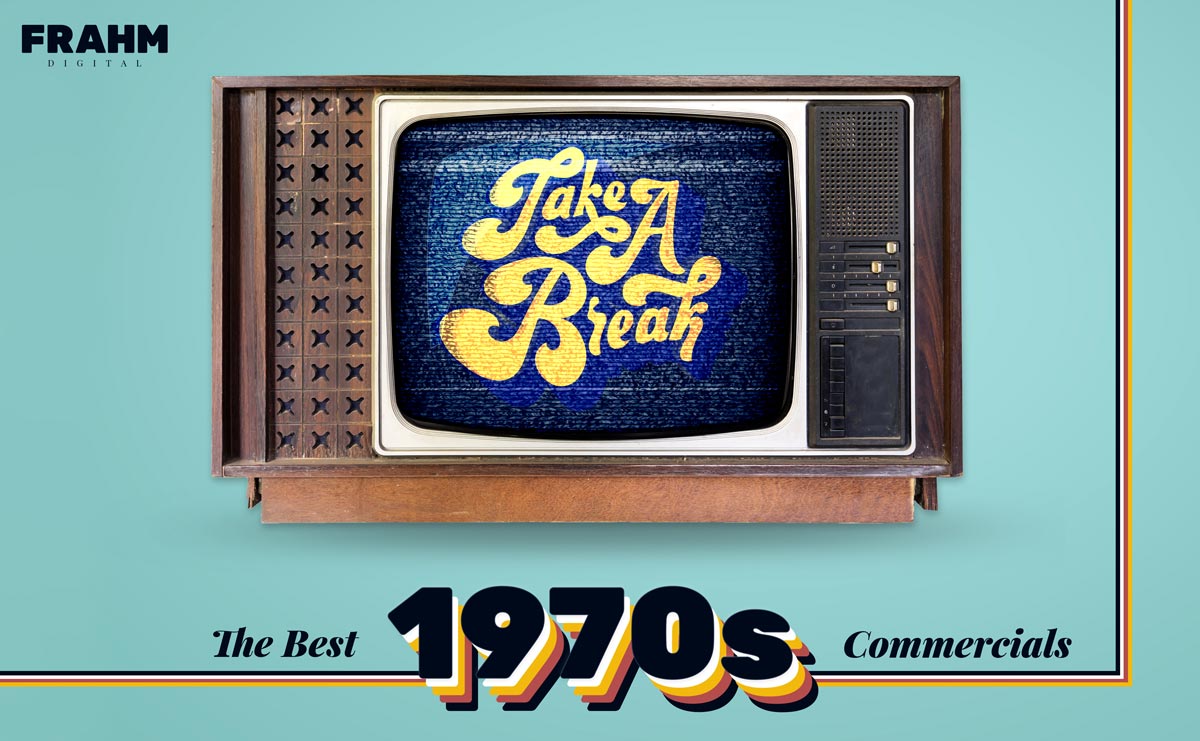 When one reflects upon the decade that was the 1970s, it’s easy to assess this era as the ‘red headed stepchild’ period of American history. Crunched between the free-spirited, ambitious activism of the 1960s and the materialistic, bigger-is-better attitude of the 1980s, the 1970s, in hindsight, was a reflection of a society desperate for identity, skeptic of authority, and just about willing to give anything a try.

Television commercials from the 1970s certainly mirror the country’s disconcerted growing pains. Watching old 70s Coca Cola Commercials gives off the impression advertising executives were flying by the seat of their pants trying to figure out what could appeal or influence people who had recently endured a decade of confrontational progressivism and watched their President give a peace sign and fly away into the clouds.

But this was the Mad Men generation of copywriting, and while innovative approaches and experimental concepts ushered in a new era of advertising, it’s certainly fun to look back on all these campaigns and try to figure out which commercials were the product of a few nine-in-the-morning glasses of scotch. So without further ado, it’s time to dust off those bell-bottoms, lace up your platform shoes, and blare some Bee Gees as we boogie our way through twenty of the most inspirational, audacious, and downright baffling 70s television commercials:

Watching this 70s Alka Seltzer Ad seems like something lifted directly out of Don Draper’s playbook. It’s relatable, it’s funny, it has a catch phrase, and above all, it gets the point across. We’ve all been in Ralph’s shoes; marveling at our own gluttony, dusting chili dog bun debris off our chests. This commercial helped Americans learn that no matter how disgusting and excessive their dieting habits are, Alka Seltzer can always save the day.

2) ‘You Don’t Have To Die To Collect’ – Allstate Insurance

The 70s were a decade of rising crime, unprovoked violence, and media obsession with rampant depravity. Perhaps that bleakness was the inspiration for the rather, um… Blunt, message, behind this 70s Allstate Insurance commercial. ‘You don’t have to die to collect’ the narrator informs us while a smiling child is playfully carried around on a loving father’s shoulders. Nothing like a nice, warm, friendly reminder of your inevitable demise before Welcome Back Kotter returns from a commercial break.

Well… Definitely no blatant sexual undertones happening here… Any commercial that begins with America’s favorite sleazy 70’s quarterback proudly disclaiming into the camera his profound excitement and anticipation to ‘get creamed’ deserves a place in the advertising hall of fame. Just try to ignore the hormonal response one experiences while watching Farah Fawcett rub shaving cream all over Joe Namath’s face, go on, try!

Here it is. The granddaddy of modern advertising. The work Don Draper had been waiting all his life to create, oops, sorry, no Mad Men spoilers. Advertising scholars have spent countless hours and courses covering the implications and themes this 70s Coca Cola commercial attempts to convey, but all you really need to know is that peace, love, and harmony can be obtained and transferred via a high fructose and caffeinated corn syrup beverage.

If someone asked a present-day millennial to create a commercial for Ford implementing all of the 1970’s stereotypes they knew, this could be very close to what their final product would be. Tight jorts, anonymous sport jerseys, Farah Fawcett look-alike, and multiple moustaches, all set to music that sounds somewhere between cheesy sitcom and John Denver b-side.

6) ‘Campbell’s in the Cupboard, is like Money in the Bank’ – Campbell’s Soup

Hey America! Are you broke due to the regressing economy and ascending unemployment rate? Looks like it’s soup for dinner! This Campbell’s commercial from the 1970s presents an optimistic and jovial take on being forced to consume chicken noodle soup for the fourth time in a week due to strenuous financial uncertainty. Campbell’s message is abundantly clear, and it’s fun watching this commercial’s pristine display of juxtaposition between poverty and promise.

Millennials, how many times have you felt entirely confused and slightly frightened whenever your parents have spontaneously recited this jingle ode to processed meat? What could be even more concerning is the notion that we’re supposed to believe that this four-year-old child prefers to enjoy his afternoons fishing off the dock, eating bologna sandwiches, and coming up with his own surprisingly catchy tunes that combine spelling lessons with frankfurter admiration. Nonetheless, this timeless 70s Oscar Mayer commercial forever lives on in the subconscious of millions of Americans.

Pepsi was still getting its feet off the ground in the 1970s, and was seemingly playing catch up to whatever ‘groundbreaking’ advertising campaign Coca Cola was cooking up at the time. While Coke was offering their product for world peace, Pepsi attempted to insert themselves as the soda for a generation, disenfranchised from the turmoil of the 60s, and now apparently obsessed with competing in Olympic-inspired summer camp games. ‘Pepsi People’ is the indie electronic band the world needs right now.

9) ‘Reach Out and Touch Someone’ – Bell System

Perhaps the tagline that’s aged the worst from this list, we can only hope that Bell System’s intentions were in the right place when they produced this 70s commercial broadcasting the joys of landline communication. Honestly, the thing that truly perturbs me is the clown from It smiling as a child picks up the phone and the chorus of ‘Reach Out And Touch Someone’ begins. Advertising executives take note; clowns are reserved for your nightmares, not daytime television commercials.

It’s hard to envision the sheer bewilderment American’s must have experienced when first laying their eyes on the triple-bun monstrosity that is the Big Mac. What now has grown to become an edible institution of patriotic values, must have initially been interpreted as a heart attack for lunch. However, the geniuses behind this 70s McDonald’s commercial helped establish comfortability and familiarity with the Big Mac by literally listing off its ingredients in typical 70’s jingle fashion. “Two all-beef patties, special sauce, lettuce, cheese, pickles, onions – on a sesame seed bun.” Ah, they just don’t write them like they used to.

Is there anything more likely to motivate you to drink whiskey than watching Sammy Davis Jr. ad-lib acapella stand-up bass riffs and generously provide himself with a three-fingered pour to which upon his first sip, spawns even more verbal guitar soloing? No, there isn’t. The only English word spoken in this 70’s commercial is the name of a Japanese whiskey brand, but it still could very well be the most articulate way to influence casual alcoholism.

And now we’ve entered the part of the 70s television commercial list that begs the question, ‘is it racist?’ Nevermind the fact that the commerical’s leading actress was born in Hawaii. Just have fun envisioning an entire generation of white parents giggling to themselves while dumping in their laundry detergent and reciting the tagline ‘ancient Chinese secret’.

Perhaps the most depressing thing about this 70’s Kodak commercial emphasizing the importance of documenting your life before you get too old and forget everything is pondering how looking back on your old Instagram page will be interpreted by your 70-year-old self. Gone are the Kodak scrapbooks depicting your childhood birthdays and graduations, forever replaced by smartphone selfies of blowing vape clouds and chugging beer bongs.

Thoughts while watching this 70’s Coca Cola commercial: 1970’s NFL stadium security must have been very lax; ‘Mean’ Joe Greene is the greatest athlete nickname ever conceived; good God Joe, that was a very solid Coca Cola chug; this ad would’ve ended so much better if Joe really lives up to his name and after saying, ‘Hey kid… Catch.’ launches the empty glass bottle at the child and proceeds to help himself to a bottle of Suntory whiskey. End of my thoughts.

There’s something… Off, with this 70’s Charmin Commercial that I just can’t seem to put my finger on… Or… My hands around? I was unaware that lustfully squeezing toilet paper in public places was a commonly acknowledged fetish in the 1970s, but now I know not to shame or stare at anyone taking too long in the toilet paper aisle of Wal-Mart. The look in Mr. Whipple’s eyes as he gets his last tee-pee squeeze in before the end of the commercial is a gaze of pure satisfaction and contentment.

Here, let’s breakdown why this is a textbook example of a successful television commercial. Xerox: A copy-machine, printer company. Monks: a technology-inept community that devotes extensive time to transcription. Premise: What if Monks had access to a Xerox machine? Boom! It’s gold! The Monks don’t have to work so hard, Xerox gets their business, the world goes around, and our technology-driven capitalistic society continues to flourish!

If you’re trying to protect the sensitive confinements of your storage locker, look no further than Master Lock! This 70’s commercial proves that not even a fired hunting rifle could infiltrate the lock protecting your excess of secondhand furniture you’re too lazy to drop off at Goodwill, as well as your 1980’s dumbbell collection and boxes of your parents’ expired coupons they left you in their will.

Nothing screams ‘progressive’ like a deodorant commercial describing the emotional tendencies of a woman, narrated by a middle-aged man! And that tagline! ‘Made for a woman’s extra feelings…’ And what might those extra feelings be, oh wise middle-aged male narrator? I wasn’t aware that sweaty pits were a byproduct of delicate emotions!

Such a comforting advertisement. We all deserve a break from the hardships of modern society by escaping our emotions in favor of devouring chicken nuggets alone in our Ford Pintos during our lunch breaks. Nothing defines a temporary pause on our responsibilities and obligations like shoving spoonfuls of McFlurry down our throats between workplace-induced tears, or delightfully choking on a quarter pound of ground beef! At least there weren’t any clowns in this commercial.

20 Commercials From The 1980s That Made You Love Advertising