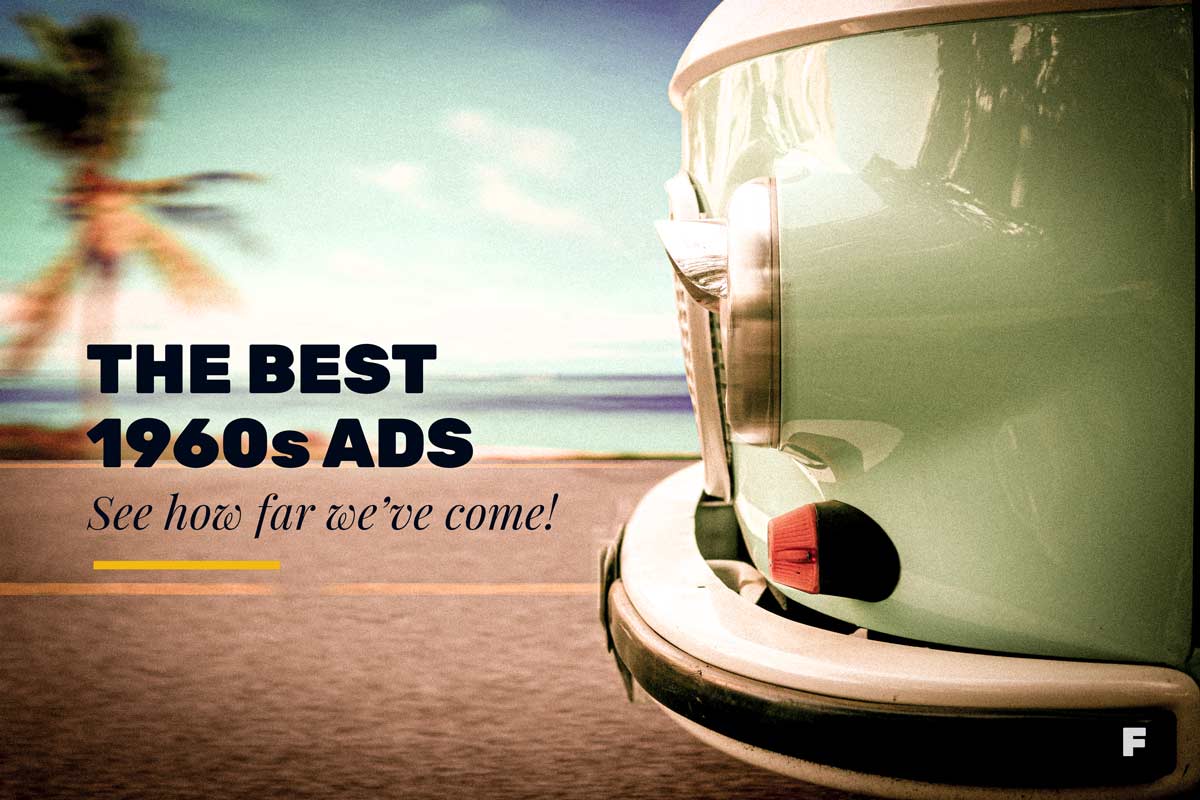 ‘There’s something happening here…’ sang 1960’s poster child Stephen Stills in his reflective and contemplative Buffalo Springfield anthem ‘For What It’s Worth’. Those four opening words just about sum up what America and most of the world was thinking but couldn’t quite put their finger on throughout one of the most influential, reformative, and evolving decades in modern civilization.

While many would argue that the buoyant spirit and introspective reasoning that defined the 60’s has and may never be recaptured, no one can argue the lasting footprint this era and its generation made upon the United States as the rest of the world watched in awe.

However, you’d be hard pressed to indicate any trace of revolution, unrest, or cataclysm plaguing the country if you were to solely view the television commercials produced throughout the decade. In fact, what you would come away with after a 60’s advertisement binge session would be witnessing a medium still in its infancy, projecting stale and expiring morals and ideals, in attempts to maintain an overall ignorance and denial that anything happening in society was out of the ordinary.

Jingles for artificial meat, animated cavemen smoking cigarettes, and copywriting that promoted sugary cereal-addicted clowns still dominated the television commercial landscape. While there are glimpses of the birth of modern advertising shimmering throughout some of these commercials, it’s still a trip to sit back and marvel at most of these PR campaigns that were most likely curated by the elite advertising agencies of their time. So without further ado, let’s take a trek through memory lane and face-palm our way through fifteen of the more memorable (and baffling) television commercials the 1960’s had to offer:

Let’s start with what can be perceived as the most stereotypical 1960’s television commercial we can find. We can easily play ‘60’s Ad Bingo’ with all the advertising cliches of this run-of-the-mill Coca Cola commercial: 50’s television narrator voice, all-American Caucasian family, bowling alleys, malt shops, harmonious jingle, Eisenhower-era teenage lust; the list goes on and on! Best of all, this commercial specifically preceded the long running sitcom ‘The Adventures of Ozzie & Harriet’, a show that makes ‘Happy Days’ look like ‘Jersey Shore’!

‘I Wish I Was An Oscar Mayer Weiner’

Perhaps the jingle to end all jingles, it seems inevitable that the ears of anybody growing up in America ultimately crosses paths this declarative ode to hot dogs chant. It’s fun to decipher the lyrics to the Oscar Mayer anthem; ‘Oh I wish I was an Oscar Mayer Weiner, that is what I’d truly like to be’. Like a Kafka novel or John Lennon channeling his inner ‘walrus’, we may never be able to interpret these animated children’s motives of inhabiting the entity of barely-edible processed meat. Nonetheless, we can’t help but sing in agreeance with their catchy pledge of allegiance.

It can be argued that this KFC commercial is the first advertising documentation to truly attempt to emulate an experience on hallucinogenic narcotics. The concept itself is rather trippy; a mob of worked-up housewives have rounded up The Colonel and tied him to a polygraph machine, all in an effort to extract his original crispy chicken recipe. The Colonel mockingly evades these women’s attempts at the truth, and I can’t imagine how many children’s dreams were haunted by the reverberated laughter projected from The Colonel when he fails to divulge his secrets. There’s a strong case that this advertisement may have been the catharsis for the CIA’s MKUltra experiments.

Before they got into the children’s vitamin game, Fred and Barney were peddling Winston cigarettes every Saturday morning. Aside from diving into the morals and ethics of children’s cartoon heroes starring in cigarette commercials, let’s not shy away from why Fred and Barney feel compelled to light up! While wives Wilma and Betty vigorously perform various lawn maintenance duties, Fred and Barney’s apathy and guilt for not carrying their weight around the house is what triggers them to escape their shame via Winston cigarettes. No wonder the kids watching this show would go on to be the rock-n-roll burnouts that defined the 70’s!

‘Taste That Beats The Others Cold!’

If you take away anything from watching 60’s television commercials, it’s probably the fact that young, attractive people sure do love the beach! And what do these all-American, law-abiding, doomed-to-be-drafted-to-Vietnam, outrageously hip teenagers love to consume while soaking in the sun? Soda! Whip up a cliche jingle describing the various ways Pepsi tastes better when stored in low-temperature environments set to a Hawaii 5-0 ripoff riff, toss ‘em a pigskin, and you got yourself the ultimate 60’s teenage beach party commercial!

You know a good way to get your point across that you’re a better presidential candidate than someone who’s running against you? Imply that voting for them would trigger nuclear warfare that would annihilate civilization as we know it, specifically an adorable eight-year-old girl picking daisies who’s unaware that this will be how she spends her remaining moments of existence! And who knows? Because Barry Goldwater got slaughtered in the polls, we can only concur that the American people read Johnson’s message loud and clear!

Before Tickle-Me-Elmo drove every parent to the brink of insanity, the fine folks at Remco produced a doll that provided nurturing joy for children and provoked spontaneous acts of violence in parents. A fair warning to viewers: Hearing Baby Laugh-A-Lot’s high pitched cackling for the first time may make you believe that the doll is the precursor to the Annabelle horror movie franchise. If you don’t immediately click stop upon hearing its deviant snickering, there’s certainly something troubling about you.

Gorgeous models walking slowly through tropical terrain, draped in silk nightgowns as tranquil tunes score her stroll. Mmm, what could this relaxing advertisement try to be selling me? Wait… Milk? Milk?? But not just any milk… HAWAIIAN MILK!!! You know, the kind of milk that helps radiate your skin tone and provide you with a natural glow your peers will be envious of! The primary accurate assumption we can make about this commercial is its foresight into how women would dress at music festivals 50 years later.

‘The Wonderful World Of Freshness’

It’s hard to envision a world where television commercials of cigarettes were the norm, but we gotta hand it to Salem cigarettes: this ad does a darn good job trying to sell us on smokes! Swinging on ropes in the park with your lover, indulging in a gorgeous day by the lake, puffing on a Salem; now that sounds splendid! What would cigarette television commercials look like today? Feverishly inhaling a crushed menthol while aggressively scrolling and swiping on a smartphone during a lunch break from work? Yeah, just doesn’t have the same allure as ‘The Wonderful World Of Freshness’!

Watching 60’s soda commercials gives us the impression that there was an FCC mandate that enforced every carbonated beverage advertisement to incorporate young people hanging out on a beach and playing sports. So what’s the only ‘difference’ between this Dr. Pepper ad and every other soda company’s 60’s television commercial? A saxophone! Oh yeah, nothing like a little jazzy saxophone to keep our skepticism at bay!

‘Putt Putt to the Pizza Hut’

What would you guess the concept of the first ever Pizza Hut commercial would be?? If you guessed ‘A rogue Shriners parade driver conducts one act of road rage-induced behavior after the other in a desperate attempt to obtain pizza’, you guessed correctly! Perhaps this commercial was predicting the driving patterns of their delivery drivers for the ensuing decades to come.

Bill Adams seems to have it all. High school popularity, female attention, what more could a 60’s male teenager ask for? Except he’s got one major problem that the entire school talks about behind his back… DANDRUFF!!! Ugh, Bill, what’s wrong with you buddy? Don’t you know your lack of hair maintenance could spell severe consequences for your homecoming king campaign?? The worst part about Bill Adams’s dandruff problem is that nobody has the courage to tell Bill about it to his face. Poor Bill.

‘When You’re Due For A Beer, Busch Does It’

Wait a minute. First cigarettes, now beer?? Fred, Barney, what’s gotten into you guys?! Man, these guys really can’t keep their vices in check, can they?? What’s next; Scooby and Shaggy doing promo for Hustler Magazine? The Jetsons starring in a Xanax TV spot?? Rocky and Bullwinkle taking pulls of Seagrams while scarfing down handfuls of paint chips??? They just don’t make them like they used to…

‘The Best Breakfast Under The Big Top’

What? You thought you were going to read a list about 1960’s television commercials and not see a product spokes-clown?? Nice try! This was still the golden era of clowns, when they rode the coattails of Ringling Brothers Barnum and Bailey, way before Stephen King forever tarnished their legitimacy. And what’s even there to scoff at? Krinkles the Clown just wants to share his love of consuming massive quantities of sugar in the morning with children around the world!

What? You thought you were going to read a list about 1960’s television commercials and not see a racist advertisement?? Think again! Leave it to Jell-O to cash in on 60s America’s fascination with Asian stereotypes to sell pudding! Note to all advertisers: if the script of your commercial contains the words ‘Chinese mother bling baby’, it’s time to start doing some rigorous focus group work.

20 Commercials From The 1980s That Made You Love Advertising