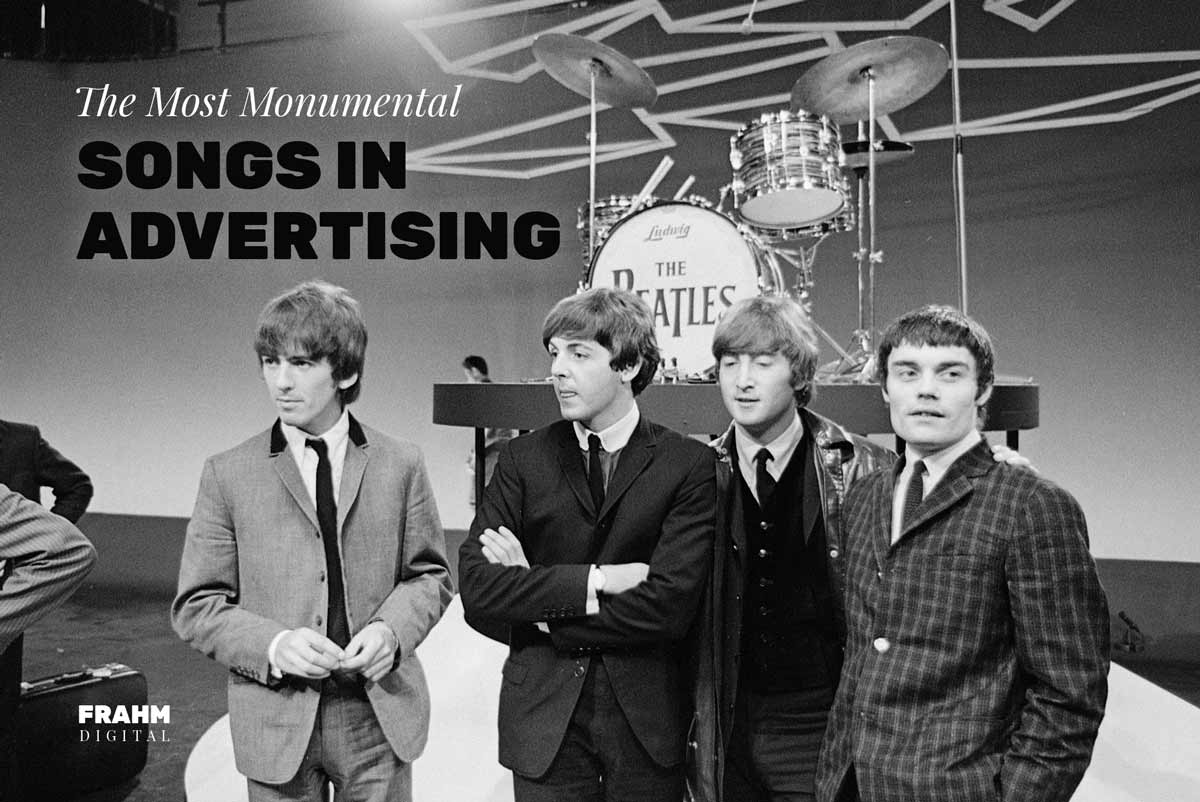 There’s a calculated formula that seems to be inevitably incorporated into the career of any successful recording artist or band. The starving artist grinds their way to the top, playing every dive bar in the country while living off Ramen noodles, until their illusions of grandeur are fulfilled by signing a record contract. Once that freshly inked signature is cemented over that dotted line, the sky's the limit. Arena concerts, global tours, private jets; all the rockstar elements that once seemed inconceivable are now a preposterous reality.

But perhaps the most intriguing dynamic to the transition from artist-to-star-to-icon is the role that advertising plays in both spreading that fame, as well as how it plays off in the eyes and hearts of the fanbase that helped get them to the top.

The concept of ‘selling out’ has long been a debated, scrutinized, and, on occasion, celebrated component of the music industry. We tend to commemorate an artist or band’s notoriety, until it becomes evident that everyone else is too. It’s ‘cool’ to like a band until it’s ‘uncool’ because more people think they’re ‘cool’, or something to that effect.

But when it comes to bands and artists crossing over into advertising, legacies may be tainted and reputations can be tarnished. But what is it exactly that irks the public’s perception of ‘selling out’? Is caving into the temptation of capitalism such an unforgivable sin? Can music still be sacred when it helps sell smartphones?

Consider these two examples: In 2011, aspiring indie rocker Kurt Vile sold the rights to his charming lullaby ‘Baby’s Arms’ to Bank of America for a television commercial. The Internet backlash was fierce, with tweeted accusations of selling out, and even fellow indie rock stars publicly declaring Vile’s attempt at cashing in as a stab in the back to the independent music community.

Vile’s response was, just like his music, humble and modest, attributing his forte into advertising as a means to help, ‘buy my daughter high end diapers and to pay back my publishing advance.’ His honesty seemed to fan out the virtual flames, and we can only hope his daughter’s diapers were drastically upgraded.

In more recent news, ‘voice of a generation’ Bob Dylan has sold his entire songwriting catalogue to Universal Music Publishing Group for a reported $300 million. Let that soak in for a minute. Bob Dylan, the face of 1960’s counterculture, a man already worth an estimated $200 million, has sold his legacy to be used in sandwich and 5G commercials for the rest of eternity.

We can respond to this news in essentially two ways: utter contempt and jealousy, or a meek tip of the hat. You can either consider this move a slap in the face to anyone who’s bought into Dylan’s message and mystique, or take it as an epiphany of how we’ll never comprehend one’s intentions until we’ve found ourselves in a similar scenario.

It’s easy to feel betrayed by an artist’s decision to cash in on their art because prior to such a decision, that art established a personal relationship with us. No matter how you feel about the intersection of music and commercialism, one thing’s for sure: marketing and music will forever be a complicated relationship that elicits a wide variety of passionate, sometimes combative emotions. Let’s take a look at some of the most monumental music and marketing crossovers and what results and receptions those pairings yielded:

Perhaps it’s fitting that the song most music historians credit to being the first true ‘rock and roll’ song is one man’s ode to his beloved Oldsmobile. Ike Turner and his Kings of Rhythm’s 1951 rhythm and blues track ‘Rocket 88’ is widely considered to have birthed the rock and roll genre, and was written about one of America’s first muscle cars, Oldsmobile’s Rocket 88.

While the tune wasn’t essentially utilized for any televised or printed commercials, the lyrics itself are an endorsement of the durability and innovation of a specific line of Oldsmobile car, and would go onto infiltrate the airwaves, and most likely the subconscious of radio listeners and eager automobile purchasers for nearly a decade.

The Beatles legacy is so secure and unquestioned that essentially nothing can undermine their importance and influence as musical icons. However, their relationship with advertising is perhaps the most fascinating of all the legendary classic rock acts for a wide variety of reasons. Let’s start in 1988 when Nike, not quite the sneaker powerhouse it ultimately became, released a black-and-white television commercial boldly blaring one of The Beatles’ most influential songs ‘Revolution’.

As if the incorporation of an anthem for social change written by an assassinated counterculture icon to be used in a sportswear advertisement wasn’t enough, turns out the remaining members of the beloved band hadn’t provided Nike with permission to use the track. However, Lennon’s wife and muse Yoko Ono was a primary shareholder in the Beatles’ catalog, and signed over the rights for Nike to use the song, without consulting with Paul, George, and of course, Ringo.

Many allude to this 1980s commercial being a kickstarter of debating the merits of blending art and consumerism. Nonetheless, the ad’s usage of the song itself heralded a new era of marketing for Nike, and wouldn’t be the last time they used an iconic band to promote a new ad campaign.

With essentially most legacy acts, no matter how much money and fame has been accumulated over the years, dipping toes into the pools of advertising is a near guaranteed inevitability. Such is the case with Led Zeppelin’s 2002 television commercial debut with Cadillac. Up until that point, the iconic UK band had never licensed their music for any commercial use.

Whether it was an honest endorsement for horsepower fondness or the royalty checks weren’t piling up as they used to be, Led Zeppelin fans were astonished and puzzled to hear the iconic intro to  ‘Rock and Roll’ as a montage of cruising Cadillacs ensued. Regardless, the partnership certainly benefited both sides, as Cadillac reportedly shelved out several million dollars for the rights of Zeppelin’s music, and the ad was linked to selling significantly more units to nostalgic Boomers caving into the hypnotic collaboration of an infectious rhythm section and V8 engines.

At the turn of a new millennium, the inception of the iPod revolutionized the music industry in more ways than one. While the invention forever changed the way audiences accumulated, listened to, and purchased music, perhaps an overlooked component of Apple’s music industry takeover was how the iPod’s advertisements helped launch the careers of a handful of indie artist recipients.

One of the biggest examples of this was Feist’s appearance in a 2007 iPod Nano commercial that featured her new single ‘1234’. While Feist was a respected emerging musician coming out of Canada, the song’s inclusion in the commercial helped the single skyrocket up the Billboard charts, reaching No. 8 and the Billboard Top 100. Feist’s album featuring the track went on to go platinum and win a variety of music awards, and it’s fair to wonder how much of that success was owed to the thirty-second iPod clip.

Another example of Apple waving its music magic wand was a 2003 iPod commercial featuring a then little-known Australian band called Jet. The commercial is etched in the brains of millions of millennials, who can immediately associate the track ‘Are You Gonna Be My Girl?’ with the dance moves of black, shadowy silhouettes rocking out with Apple headphones on. It was another two-way street of success for both product and artist, as the ad ushered in a new era of iPod customers, and Jet went on to sell 3.5 million copies of their debut album that featured the aforementioned chart-topping single.

Throughout their career, Seattle rockers Pearl Jam have relished the luxury of having their cake and eating it too when it comes to their relationship with consumerism. In their early days, they heralded themselves as crusaders against capitalism, famously taking on ticket sales tycoon Ticketmaster in the mid 90’s.

While their hearts seemed in the right place then, eyebrows were raised when nearly two decades later, they essentially rolled out an entire new album and single through the help of… Retail store chain Target? Cringey is one way to describe a highly successful, steadily-exceeding middle age band jumping around on stage, yelling lyrics such as, ‘When something's dark, let me shed a little light on it,’ as Target logos are projected all around them. Ultimately, this marks yet another example of the blurred lines and endless possibilities when it comes to marketing and music.

Watch the U2 commercial

Most people can vividly recall the moment they looked down at their iPhone and thought to themselves… ‘Hey, I don’t remember purchasing or downloading a new U2 album!’ It was 2014 that the U2 album ‘Songs of Innocence’ marked arguably the most aggressive and controversial unveiling of music and marketing of all time.

If you don’t know the story by now, long story short, U2 partnered with Apple to ensure their new album would be automatically downloaded onto every one of the company’s half-billion customers’ personal cell phones. The ‘collaboration’ prompted skepticism to say the least, with most opinions of the move teetering between an ‘annoyance’ and ‘invasion of privacy’.

That’s certainly not how U2 saw the rollout, declaring the intention being to reach ‘as many people as possible’, and guitarist The Edge describing the release as, ‘actually incredibly subversive. It's really punk rock, it's really disruptive.’ There has never been a musical marketing move as momentous and contentious before and since everyone received a free U2 album on their smartphone. However, there are rumors of a new U2 album being in the works, and perhaps their third commercial collaboration with Apple will be the charm and help us forget ‘Songs of Innocence’ ever happened.

10 Tips to Make Your Music Studio Website Stand Out